– When you enter the server the first time you will be shown in the box first degree of biological research biologist Lv.30 ie, not to send items to you until you do this biologist level 30.
– This box can be closed-open all the time.
– When you send an item you need for counter-analysis will increase by + 1 and will be eg 1/10, which means that 1 is the actual value of objects that were successfully retrieved for analysis and 10, is the maximum number of objects that should be sent to complete the picture being lv.30 research.
– When you finished all levels of analysis of biological system will be completely clean and will not operate any function on that character.
– When you try to send an object, but you do not have the required level for that analysis.

– When the time has not expired and you can not do that.

– The waiting time will decrease an analysis putty that you are not online game, it will fall further as long as the server is online.
– All data packets that are sent to the server client are in a very stable performance. The code is highly optimized to be no problem at all.
– 100%, there is no bugs or problems.
– All information and settings for each party are biologist from the file server biologDefines.h, nothing is customer configurable from translations or whatever.
From error, messages, images, texts, everything is configurable values of that file from the source, and very easy to use because everything is explained everything.
– All initial settings is like official ex: Count of object maxim, Time, Reward’s bonus, Reward’s item’s. ( all is configurable very easy, and you can change all very simple bonus,time,message etc. )
– All objects you can and drop the official, chance can change very easily.
– There is much to say about this system, but this just came to my head at the moment.

This system is much more optimized *10 times compared to 12 quests as they were the bfficial those quests were crap they have in total 3,500 lines. default_wacko.png my code is / 10 haha.

Notice when time expired of analyze:
In this window you can see the following things:
– When during an analysis biologist did it expires in the right side of the screen game system will notify you in real time saying that time has elapsed and you can send an object to the destination.
– Notification can not be closed, it will be valid only slightly screen for 10 seconds informative.

Informations about rewards, when you finish a one analyze:
When you’re done any analysis of a degree of biologist you will see a popup window will be open 15 seconds on the screen.
In this window you can see the following things:
– Name of the extent of the analysis that you have done.
– Name bonus you received.
– The bonus amount you received it.
– The object that you have received.

Select rewards for biology 92 and 94:
You need to select what reward what you want.
Your box will appear when you’ll end category.
When you press the button to accept a box will appear if you are sure you want to accept that bonus or not, if not press box will give you the opportunity to choose another bonus.
Do not worry if you hold X on the box and closed because we did a check within the server as when you finished that class and do not have accepted the reward at that time, the system will automatically detect this and you will reopen this box select prize when you will teleport / change character etc.
There can be no bug in the selection of awards. 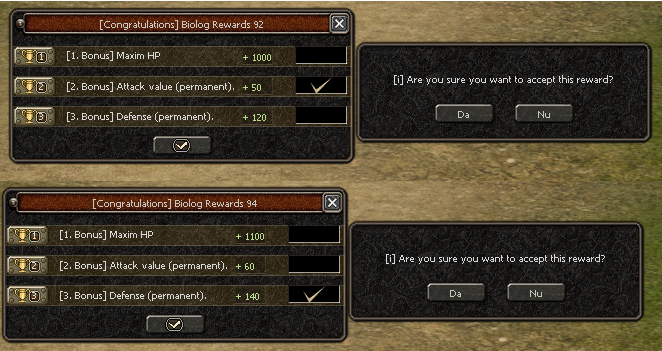 Researcher’s Elixir
Increases quality of items for research increasing the probability of delivering them with success.

Without elixir active -> Chance is 60% for succes

With elixir active -> Chance is 90% for succes 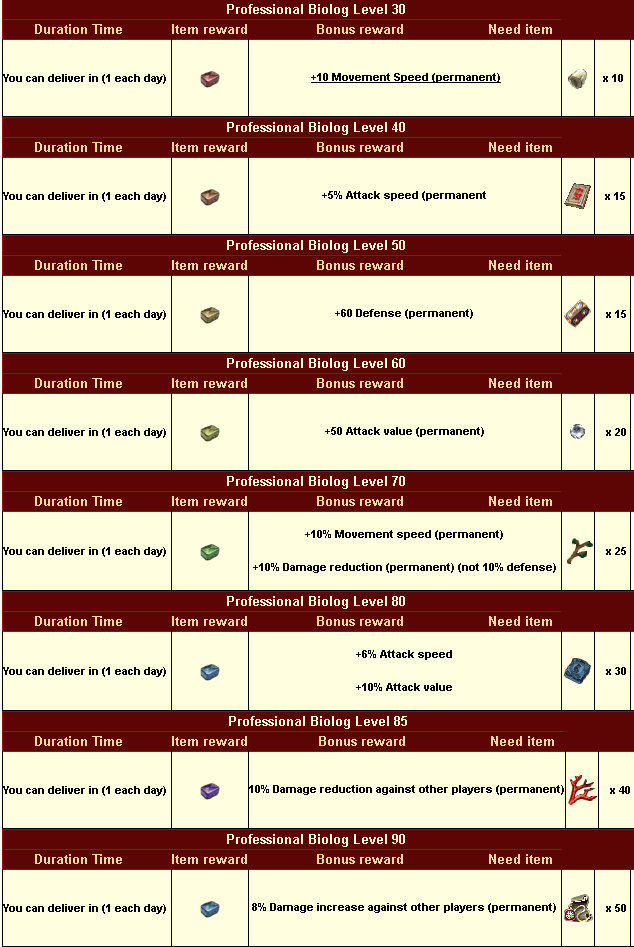 Are you sure you want to delete clan?